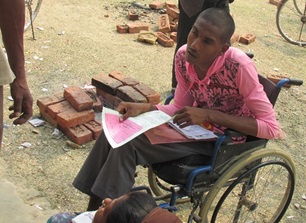 The above statement was said by Ghanashyam Tharu while in Sectoral mobile service Camp conducted at Shree Nepal Rastaya Madhyamik Bidhyalaya, Bankatawa 1, Pedari Banke on 26 March 2016. The organizer of the camp was VDC office of Bankatawa and supported by ENRUDEC under USAID/Sajhedari Bikaas Project. Mr. Thru lives in Bankatawa ward no 1. There are 3 members in his family; his brother and a sister. Their parents were already passed away when they were small. In the neighbor there lives his maternal uncle. With the support of him, Mr. Ghanashyam Tharu made his birth certificate, citizenship certificate and his disability certificate. At that time his brother and sister were small. But now they become young and as being their parents he has responsibility to do everything on his head like making birth registration etc. Because of disability he couldn’t go to the VDC office for this. Because the VDC office is 10 KM far from his home. He was in tension that how to go VDC office and do make registration of his sister’s birth registration and citizenship for his brother.As like Mr. Ghanashyam and Ganesh, lots of aged people, child, women and other marginalized community directly get services from the camp. The mobile service camp was integrated within VDC. All line agencies of VDCs, Health post, Agriculture, Livestock had provided their services to the communities. In the camp the eye checkup from Fattewal Eye Hospital and Ear checkup from Brinoj Hospital npj also provided services.  Altogether 675 people including 255 male and 420 female, 1066 domestic animals directly benifited from the camp.